With an eye on its ambitious Round 3 offshore wind programme, the UK Department of Energy and Climate Change is targeting a 50 per cent technology cost reduction by 2020. Tim Probert explores how the industry is working to reduce the cost. This article was first published in the September 2012 issue of Energy World.

The core of any business model is a predictable return on investment, the difficulty is being sure of the return. As the UK prepares to build out her 32 GW Round 3 offshore wind programme, the uncertainty of construction costs has raised concerns among investors that the estimated £100 billion capital required may not be forthcoming.

Round 3 may seem a small step from Round 2, but in terms of capex and opex it is a giant leap. Existing offshore wind farms are sited in near-shore, shallow waters of up to 20 metres. To realise the North Sea’s full potential, however, Round 3 projects will be located further out to sea – potentially 200 km from shore at depths of 50 metres or more – which requires larger arrays, bigger turbines, deeper foundations and longer construction times.

As no other nation has attempted to build offshore wind at these depths and distances, nobody can be exactly sure how much these pioneering projects will cost to build. The costs of Rounds 1 and 2 are estimated at £135-145/MWh, around three times the current wholesale price of electricity, but Round 3 offshore wind farms are expected to be significantly more costly.

Engineering consultants Arup estimates the levelized costs of electricity (LCOE) in 2015 of Round 3 at anywhere between £168-£225/MWh, including transmission costs. However, the Crown Estate, which leases marine areas around Britain for offshore wind farms, believes this estimate to be fundamentally flawed because it assumes a 38 per cent capacity factor, as opposed to the current average capacity factor of 31 per cent.

The Crown Estate assumes projects deployed today will acheive a capacity factor of around 40-42 per cent, increasing to up to 50 per cent by 2020. The improved capacity factor will offset increased capex and opex, and subsequently it puts the LCOE of Round 3 offshore wind farms as broadly equivalent to current projects at £140-145/MWh.

The Department of Energy and Climate Change (DECC) is targeting the cost of offshore wind to come down to £100/MWh by 2020. While this is a very challenging target, steps are being taken by developers to slash costs by using better loading and installing methods, standardising substations and connections, improved cables and, perhaps most importantly, using larger wind turbines.

The latest offshore wind farms employ turbines with a typical power capacity of 3-3.6 MW but, targeting Round 3, the world’s leading OEMs are set to bring to market machines with double the power. These turbines will be taller than The Gherkin and have turbine rotor diameters larger than the London Eye, standing in depths up to 60m, in some cases more than 200km from shore.

French manufacturer Alstom has designed its first ever offshore wind turbine – the 6 MW Haliade 150 – with Round 3 in mind. Aerodynamically optimized to operate at a depth of around 35 metres and a wind speed of 9.5 metres/second, Alstom is targeting installation of 200 turbines a year in the UK and France once serial production commences in 2014, equivalent to 1.2 GW of new capacity per annum.

Frederic Hendrick, Alstom’s vice president of offshore wind, believes 6 MW is the optimum size of turbines for Round 3. “We have paid a great deal of attention to the capacity factor of our offshore wind turbine, as we wanted to optimize the total cost of electricity rather than the total cost of the nacelle.

“It’s very important to optimize the total cost of power and substructure. We’ve paid close attention to the total mass, particularly in minimizing head mass (nacelle plus rotor). All the rest, the transformer, converters and low voltage switchgear is contained in the bottom of the tower, so the lower the head mass, the less the stress placed on the substructure.

“We looked at various power ratings up to 10 MW and what is required in terms of blade length, the weight of the nacelle and the implications for the turbine substructure, which can account for 30-40% of the total cost. We found 6 MW to offer the best value in terms of total cost of electricity.”

Siemens is also launching a 6 MW turbine aimed at Round 3. The German firm has begun construction of two test SWT-6.0 machines at Danish utility Dong Energy’s Gunfleet Sands array off the Essex coast. Once operational in November, these will be the biggest turbines so far deployed in the UK.

Both manufacturers have opted for direct drive permanent magnet generators rather than utilize gearboxes, which are prone to malfunction in the harsh, turbulent environment of an offshore wind farm. Henrik Stiedal, chief technology officer of Siemens Wind, says direct drive generators also reduce the weight of the nacelle, thus reducing stress on the substructure.

“So far, large wind turbines have always been heavier per megawatt than small ones,” he says. “The SWT-6.0 breaks this rule and has a weight per megawatt similar to many machines in the 2 – 3 MW range.”

It is not clear that ever larger turbines will be cost-effective, says Alstom’s Hendrick. “It would be easy to make a 10 MW turbine, but it would have a poor capacity factor.  Our customers need simple, robust, reliable and efficient machines to minimize maintenance costs, which are a killer for offshore wind.” Alstom is targeting a maintenance interval of one year for Halidade 150.

Larger turbines need larger foundations and at depths of 30 metres and below, low-tech, relatively low-cost steel monopiles hammered into the seabed start to become impractical. Steel jacket foundations, which resemble miniature oil rigs, will play a significant role in Round 3. Martin Grant, head of energy at engineering consultant Atkins, which designs steel jacket foundations in conjunction with fabricators Burntisland Fabrications in Fife, says the UK is well placed to drive down the costs.

“Thanks to North Sea oil and gas, the UK already has a world-class supply base for foundations, with major skills centres in Fife, Murray Firth, Inverness, the North East and East Anglia. The offshore wind industry is now becoming sufficiently mature that commercially-driven research is driving innovation and, as happened with North Sea oil production, costs will come down significantly.” 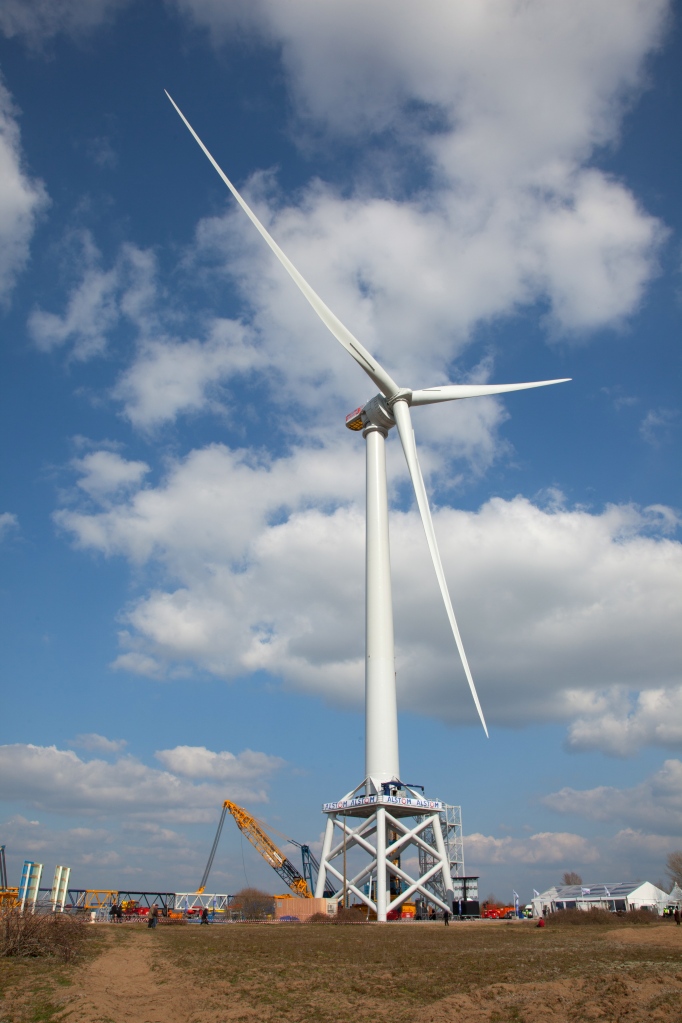 The primary mechanism to support the construction of offshore wind farms is, of course, DECC’s Renewables Obligation. Offshore wind farms eligible for two Renewable Obligation Certificates (ROCs), although this subsidy will fall 5 per cent in 2015/16 to 1.9 ROCs and to 1.8 ROCs in 2016/17.

While offering generous support to offshore wind, the RO is not viewed by investors as yet sufficient to support construction of Round 3 due to the ‘known unknowns’ of construction and technology risks. There have been a host of setbacks to befall offshore wind farms in what are relatively shallow waters compared to Round 3.

The 504 MW Greater Gabbard offshore wind farm, for example, a joint venture between RWE Innogy and Scottish & Southern Energy (SSE), has been beset by a lengthy construction over-run.  The project, which involves the installation of 140 wind turbines located 25 kilometres off the Suffolk coast, was initially due to be commissioned in 2009 but is now due to be completed by the end of 2012.

The delay is primarily due to welding defects in 52 of the array’s ‘transition pieces’, which form a base upon which the wind turbine stands. The project has also faced construction delays due to the bankruptcy of subcontractor Subocean, the death of a worker, and even the controlled explosion of a 680 kg mine laid by a German ship during the Second World War.

Meanwhile, Danish utility Dong found that grouting in the foundations of 164 turbines at its Horns Rev 1 & 2 and Burbo Banks offshore wind farms had failed, necessitating costly repairs, while at the Swedish utility Vattenfall’s Kentish Flats array, some turbines are on their fourth gearbox. The additional complexity of Round 3 means that potential early-stage investors fear a significant risk of returns being heavily diluted by construction over-runs.

Green Investment Bank to the rescue?

Fortunately, there may be a white knight on the horizon in the form of the Green Investment Bank (GIB). Investors view GIB as having a crucial role to play in plugging gaps, such as where the private sector is unable to bear the full risks of Round 3.

“Our vision is to replicate the success of the ICFC (Industrial and Commercial Finance Corporation), which eventually became 3i,” says Anthony Marsh, head of transactions at UK Green Investments, set up by the Department of Business, Innovation and Skills to oversee the creation of GIB. “The idea is to give a final push to technologies deemed ‘nearly commercial’. That’s why the GIB has ruled out investing in onshore wind, which does attract finance, and marine energy, which is deemed not nearly commercial enough.”

Marsh says the bank could directly invest in Round 3 projects in partnership with the private sector to reduce construction risk through ‘learning by doing’, thus attracting a wider range of investors in the longer term.  “The plan is to prove it works so that private capital piles in and then we move on to another technology,” he says.

“The holy grail is to get institutional, long-term funds into the offshore wind sector who are not investing because they think the risk/reward profile is not appropriate. They need long-term certainty and we’re here to encourage them to have that.”

As the GIB sits on the Government’s delicate balance sheet, the Treasury has capitalised GIB with just £3 billion but after 2015, when the bank will assume full borrowing powers, liabilities are expected to increase substantially. Andy Cox, head of power and utilities at KPMG, believes GIB is the key to unlock the £100 billion required for Round 3, but not necessarily as a front-line investor.

“At this stage GIB needs to be a pioneer focused on financing first-of-a-kind type projects by underwriting construction risks via guarantees rather than capital.  There is liquidity in the market but investors are wary of taking credit risk.

“The GIB could stand behind primary project contractors, which would assume a certain level of over-run risks, with a second tranche of construction support. By assuming some of the construction risks more private capital will be forthcoming.”

Calculating some of the more exotic construction risks of Round 3 projects like weather windows and non-availability of vessels is proving such a headache that insurers are unable to step into the breach, according to Jerry Biggs, CEO of UK renewable energy finance and insurance company Narec Capital. “There are gaping gaps in insuring offshore wind farms and some projects have been uninsured,” he says. “This is particularly unpalatable for debt finance.

Biggs believes GIB should work with insurance companies and research institutions like Narec (National Renewable Energy Centre) to develop models to underwrite challenging debt structures and in turn lower the cost of premiums, which account for 26% of opex on average. “Once they have that knowledge base, insurers will then undercut each other and bring down premiums rapidly,” he says.

Narec is one of four organisations granted approval by the Crown Estate to construct a demonstration site for the next generation of offshore wind turbines. Narec’s 100 MW, £333 million Blyth Offshore Wind Demonstration Site near Newcastle will comprise 15 ‘pods’, which developers will rent to test large-scale turbine prototypes, organized in three arrays at water depths ranging from 38m to 57m.

The site, due to be fully operational by summer 2014, will also feature an ‘Anemometry Hub’, a high-specification research platform fitted with the latest technologies for measuring wind resource and collecting marine conditions and marine life data.  Benj Sykes, DONG Energy’s director of UK wind power operations, believes demonstration sites such as Blyth are the key to driving down the costs of Round 3.

“We have investment partners including Dutch pension funds and Lego and to keep our partners happy we must have low-risk technology as well as low-cost technology,” he says. “The only way we can achieve that is by taking it out to sea. Supporting the technology through the demo phase mean that utilities like DONG will be able to deploy it with confidence.”